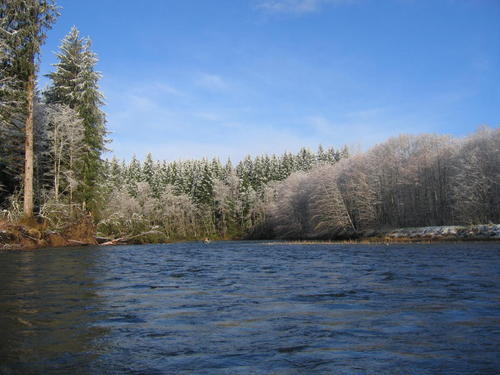 The rivers of the western side of Washington's Olympic Peninsula are amongst some of the most beautiful in the world. Although in certain stretches of each river you might mistake one for another, each of the area's streams that we fish has a unique character from the raging rapids of the upper Sol Duc, Calawah (and it's tributary, The South Fork Calawah) to the broad glacial valley of the Hoh River or the gentle meandering of the middle and lower Bogachiel.


Below, you will find a little more information about each of these magnificent salmon and steelhead fishing streams.

Perhaps the best known of the area's rivers, the Sol Duc (Quileute for "sparkling water') begins in the Seven Lakes Basin in Olympic National Park and surges downstream amid it's countless boulderfields to its confluence with the Bogachiel River ( the combined rivers become known as the Quillayute ).

The river has a long angling history and has several famous fly patterns named after it that were originally tied by flyfishing legend Syd Glasso who lived and taught in the town of Forks for some time.

We probably spend more fishing days on this river than any other over the course of the year due in part to the river's ability to stay in good fishing shape even after a fairly heavy rain.

The river, especially the uppermost drifts, have relatively steep gradients and provide anglers with a fun ride down the river even on the days when the fishing isn't the best.

The main river begins just four or five miles east of Forks where it's two forks (the North and South, of course!) join and it dumps into the Bogachiel about three miles west of town just below the steelhead hatchery on the Bogachiel.

The river receives light fishing pressure to due to it's relatively poor bank access and the nearly constant class II and III rapids that make navigating the river dangerous for oarsmen not familiar with the rivers many splits and drops.

For decades, the river was the last one to go out of fishing shape and the first to come back in following a heavy winter rain. This changed, however with the emergence of some large slides that formed on it's South Fork during the '97 flood. These slides now appear to be stabilizing.

Although salmon and steelhead do not return to this river in especially large numbers, those that do are often quite large. Many 30+ pound steelhead have been caught in its waters and rumor has it that a state biologist, doing a king salmon spawning survey years ago, found a king carcass with the fish's estimated weight (upon entering fresh water) at over 110 pounds!!

The South Fork of the Calawah is the least fished floatable (only by VERY experienced oarsmen familiar with the river) piece of water around the Forks area.

The river is only open from Hyas Creek down (maybe four miles above the forks) until the end of February. Therefore it is only fishable for a short amount of time each year (after the arrival of the wild steelhead).

Seemingly just a creek in some areas, this is usually the first place we go after a high water but the unstable slides high upstream often change these plans. The river is filled with smaller pockets and runs that make it a superb hardware or fly fishing option.

The numbers of fish are small, but it's splendid beauty and just enough fish to keep a few rods bending make it an excellent experience. The last stretch above the forks is known as "Hell's Half Mile" with a long, continuous stretch of class III rapids followed by a III+ final drop that will take any driftboater's breath away!

The Bogachiel (meaning "gets riley after rain") is, for most of it's fishable length, the "bunny hill" of the region's rivers.

Beginning on the southwestern flank of Bogachiel Peak in Olympic National Park's High Divide, the river lays mostly within the park boundary.

The river is best known amongst anglers for it's large run of hatchery origin steelhead yet some of the largest steelhead to return to any Peninsula stream return to the upper reaches of this river.

The upper reaches of the rivers boatable water is characterized by small "rock gardens" nestled between some of the finest fly fishing water on the Peninsula.

As you near the river's confluence with the Sol Duc, the river's gradient becomes flatter and often forms long slow pools that leave driftboaters wishing they had outboards.

Often changing its course by hundreds of yards after a heavy rain, the shifts in the riverbed are only part of this river's multi-faceted character.

From the National Park boundary (the uppermost launch) downstream, most of the river meanders through ancient glacial deposits and often enormous log jams through most of it's length. Then, just ten miles from the ocean, the river abruptly drops into a a small canyon cut out of bedrock.

Through the "canyon", layered rock deposits point upward nearly vertically showing evidence of the strong tectonic forces that created the Olympic Peninsula millions of years ago.

These rock walls rise abruptly, covered with moss and some towering spruce, fir, and hemlock that were already here for centuries before the arrival of the white settlers. Small waterfalls running off the canyon walls into the river are about the only noise you'll hear other than the occasional call of a bald eagle or the drumming of a male grouse.

The "canyon" stretch lasts about two miles, then, just as suddenly as we drop into it, we re-emerge into the broad valleys of the lower river.

The Cowlitz originates form the south side of mount Rainer and flows down in to Riffe Lake and then into Mayfield Lake where there is Mayfield dam. From Mayfield dam the river flows through farm country until reaches the Columbia River in the town of Longview.

The Cowlitz River is without doubt the most popular river in the state of Washington and for the last twenty years continues to boot out the most numbers of both winter and Summer Steelhead caught by anglers in a season. The Cowlitz hosts not only the largest runs of Hatchery Steelhead, but is also responsible for big runs of Spring Chinook, Fall Chinook, Fall Silvers and Cutthroat Trout.

We spend most of our time on this river chasing Summer Steelhead and Fall Salmon in August and September.

The Lewis River is mostly known for its great return of Spring Chinook and Summer Steelhead but also is host to good returns of Winter Steelhead, fall and Winter Chinook and Silver Salmon. With two hatchery’s and also numerous net pens large amounts of hatchery steelhead and salmon return each year to this great stream.

We tend to target this river in the spring and early summer chasing the great fighting Spring Chinook and Summer Steelhead  with numbers reaching as many as 10,000.  The river is small enough that it can be fished from both drift boat and Jet boats or from the bank in key locations.

We will usually fish out of our 25’ Alumaweld Super Vee allowing us to cover more water and use techniques more suited to Spring Chinook Fishing.

The Mighty Columbia river separating Washington, Oregon and Idaho starts way up in the Canadian Rockies winding its way down through 13 dams, Many lakes and through the Columbia gorge and on into the Pacific Ocean between Astoria, Oregon and Ilwacco, Washington. Traveling over a 1000 miles it picks up many a great Steelhead and Salmon spawning stream tributaries along its way, making it host to the largest runs of Salmon, Steelhead and Sturgeon in the world.

With runs of Spring, Summer and Fall Chinook, Summer and Winter Steelhead, Silver Salmon, Sockeye Salmon, Shad and Sturgeon all numbering into the millions it allows for some great fishing to be had year around.

With its awesome size and water flow most of the fishing takes place in our 25’ Alumaweld Super vee while anchored in a traveling path or trolling covering as much water as possible. The fantastic runs and length of this river give you great fishing opportunities and a very diverse amount of scenery from the Columbia gorge walls to the spray of the ocean at its mouth.