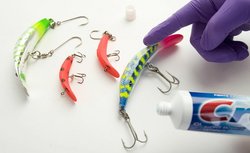 Veteran salmon and steelhead fishing guide Bob Kratzer says people get a good chuckle when he cleans his plugs with Crest toothpaste.
But Kratzer, of Angler’s Guide Service in Forks, Wash., doesn’t care. He believes being "freakishly clean’’ with his plugs, his leaders, even his main line, is critical to catching fish regularly.
At the Washington Sportsmen’s Show in Puyallup last week, Kratzer said he has a theory that fish put out different pheromones when doing different activities, including when they are scared.
Those pheromones send a message to other fish.
"When you’re hooking them, they’re putting off that pheromone in their slime, and if they roll up in your line, then it’s on your line,’’ Kratzer said. "How many times when you’ve caught fish is there slime on your line? If I’m catching fish regularly, to get rid of that slime, I change my leader regularly.’’
Yet that’s nothing compared to the religious fervor he has for keeping his plugs clean.
"Every single plug that goes in the water, when I’m done fishing with it, when I take it off, I’ll set it aside and grab my next lure,’’ he said. "Then I’ll take the one I took off and with a little, round scrub brush you can buy in grocery stores clean it and let it hang in the boat until it’s dry.’’
Dawn or lemon-scented Joy are the best two grease-killing soaps, he added.
It is what Kratzer does before he puts a lure in the water that raises eyebrows.
"The second thing I do, and I’m sure everybody will laugh, is before I put my lure in the water I’ll clean it with Crest — regular Crest toothpaste, I’ll say it again, regular flavor.
"I put a little dab on it and I rub my lure with it, I clean my lure with it really good. Think about it — it’s abrasive and gets a lot of junk out. The cool thing about it is when you brush your teeth, it leaves your breath smelling good, but it goes away pretty quick. I put it back in the water and it only takes about 10 or 15 seconds and it’s all gone.’’
Kratzer is adamant in using regular-flavor Crest.
"I’ve tried the other ones, and they don’t work.’’
Out of regular-flavor Crest once, he used wintergreen and was promptly outfished by one of his less-experienced guides. He went back to regular Crest and success improved.
A few days later he tried wintergreen again, and success dropped.
Years ago, Kratzer had manufacturer Luhr Jensen send him 100 new plugs.
"Every day we fished for a year I’d take one fresh plug out of the package and put that on a rod,’’ he said. "We found that brand new lure would outfish the other ones 3-to-1.
"So I thought, what’s going on here?
"We could only come up with that these lures are plastic, and if you put food in your refrigerator and it’s been in there a little while, then you empty it out, and you can’t hardly get the smell out of that plastic container. Same thing with a lure. You get smells into the pores of the plastic and it won’t go away.’’
But using a new plug every day gets expensive.
"We kind of cured that a little bit by being so freakishly clean,’’ Kratzer said.
If he gets two short strikes, where the fish did not hook up, he brings in the plug, replaces the leader and cleans it with toothpaste.
If he get three short strikes in a row, Kratzer then cuts off the swivel, bead and 30 wraps of his main line off his reel.
"I’m serious about making sure that stuff is all clean all the time. It’s really, really important. When you think about, they have a long time to smell all this stuff before they ever get to it.’’
Kratzer, who also guides for spring chinook on the Columbia, Cowlitz and Lewis rivers, offered another tip:
Lure adjustment — Plugs with screw-eyes such as Hotshots, Flatfish and Fatfish can have very different action from one lure to the next, he said.
A screw-eye plug is moulded together then the lure is manually held while the hole for the screw-eye is mechanically drilled and the eye is mechanically screwed in, Kratzer said.
"What do you think are the varying degrees of me holding my hand at the right place at the right table every single time? Not very good. That’s why you go buy a plug and they all work remarkably different.’’
Krazter has a plug that he estimates has caught 75 fish. No longer fishes with it.
With a caliper, he’s measured every dimension and setting on the plug, and adjusts all new plugs of the same manufacture and size to match.
He also has a special pair of pliers which have been ground slightly so when they fit a certain way in the screw-eye, he knows the screw-eye is at the desired height.